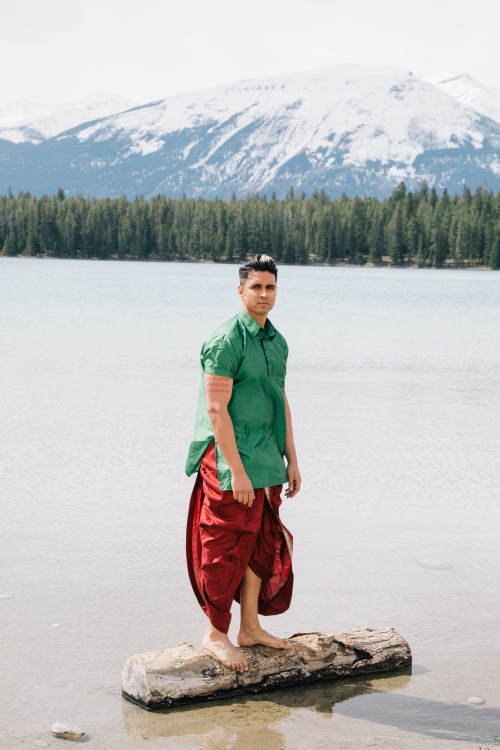 Vivek Shraya’s body of work includes ten albums, four short films, and three books that have been used as textbooks at several post-secondary institutions. His debut novel, She of the Mountains, was named one of The Globe and Mail’s Best Books of 2014. A three-time Lambda Literary Award finalist, Vivek was the 2014 recipient of the Steinert & Ferreiro Award for leadership in Toronto’s LGBTQ community, the recipient of Anokhi Media’s inaugural Most Promising LGBTQ Community Crusader Award in 2015, and a 2015 Toronto Arts Foundation Emerging Artist Award finalist.

Vivek stopped by the blog for an interview ahead of his July 8 appearance.

BWS: In She of the Mountains, we see the protagonist first embrace his sexual identity, and later, his ethnic one. The descriptions of the former, “transitioning from you’re gay into I’m gay had also allowed him to stop having to think about, question, and sometimes be ashamed of his desires,” even seems to echo the latter, “In the absence of white, he could see colour [and difference between shades of brown]. Falling in love with her brown had unexpectedly given his own skin new value, a new sheen.” Did you intend for there to be a similarity in these two moments?

Vivek: I love this question. Honestly, for the narrator to embrace both his sexual identity and ethnicity was never the original intention. But She of the Mountains grew into a story that is ultimately about a man and his relationship to his body, which of course includes his desire and his skin colour, so it makes sense that self-love in both areas had to be explored.

BWS: You’ve stated elsewhere that the main character’s experiences are based on some of your own, and that the book was written as a challenge to biphobia, which, the book shows, exists both within and outside the queer community. How do you see this persistent opinion–that no one is actually bisexual, that people should “pick a side”–affect the community and bisexual people, and why do you think it persists?

Vivek: The hard truth is gay people are just as attached to binaries and boxes as straight people. Boxes keep us safe. If you can put me in a box, you can figure out how to interact with me. Without boxes, there is chaos and danger.

Except this is a lie. Because what is actually so threatening about desiring across genders? This is the kind of question that we must ask ourselves to eradicate biphobia, but unfortunately this questioning doesn’t often accompany the snap judgements we make.

BWS: Do you have any anxieties about writing such a personal book? How do you manage the tension between fact and fiction?

Vivek: In regards to the tension between fact and fiction, my job as a writer is to tell a story. The best possible story I can tell is not one that is based solely on fact, and the best story I can possibly tell is always the priority.

Consequently, my main anxiety about being inspired by the personal is that the work won’t be taken as seriously, on the assumption that no craft is involved in writing based on true events.

Vivek: I appreciate the compliment! I was once advised by a publisher never to write sex scenes because “no one can do it well.” I had those words in my head when I was writing this scene, largely because I found it hard to write sex without sounding cheesy. But no, this book wouldn’t have been possible without sex, for the reason you pointed out. Furthermore, being queer, I do feel a responsibility to write about sex because our sexuality continues to discomfort conservatives, and therefore be invisibilized. So often I hear queerness being connected to the choice to love whomever we want. This is true, but queerness is also inextricably linked to sex. We can’t forget this. In the words of Canada’s first openly gay senator, the late Laurier LaPierre:

“We’ve come a long way since Trudeau partially decriminalized gay sex 40 years ago. We have built community, come out in droves, connected with each other, demanded and obtained equal rights. We even won the right to marry. But we are still not totally free. We are still limited in the expression of our sexuality. If our society is to truly liberate sexuality, gay and straight, we have to talk about sex. We need to discuss the essential value of expressing the totality of our bodies, of our attractions and desires.”

BWS: Thanks so much, Vivek–see you on July 8!