“What to Consider if You’re Considering an M.F.A.”

The reading is PWYC (suggested $3-$5) and features a Q&A with the writers afterward. Books and treats are available for sale. Please note that while the venue is wheelchair accessible, washroom facilities are not.

Nancy Jo Cullen’s stories have appeared in The Puritan, Prairie Fire,Grain, Plenitude, filling Station, The New Quarterly, This Magazine andThe Journey Prize 24 and 26. She has published three collections of poetry with Frontenac House Press. Her most recent book, the short story collection Canary, is the winner of 2012 Metcalf-Rooke Award. Nancy Jo is the 2010 winner of the Writers’ Trust Dayne Ogilvie Prize for Emerging LGBT Writer.

Irfan Ali is a writer from Toronto’s west end. His poetry collection, “Who I Think About When I Think About You”, was shortlisted for the 2015 RBC Bronwen Wallace Award. He’s currently finishing up a manuscript, this is it., a story of love and loss told in poem. Outside of his craft, Irfan keeps himself busy as a teacher, program manager, and DJ.

Sarah Henstra is a professor of English at Ryerson University, where she teaches courses in gothic literature, fairy tales and fantasy, and women in fiction. Some of her best story ideas come from classroom discussions. She lives in Toronto with her two sons (one teen, one tween), and a poodle named Nora. Mad Miss Mimic is her first novel.

Originally from Saskatchewan, Lana Pesch is a Toronto-based writer and producer. Her short fiction has appeared in Taddle Creek and Little Bird Stories: Volumes I and II. Lana was long-listed for the 2014 CBC Short Story Prize, and won the Random House of Canada Creative Writing Award at the University of Toronto in 2012. Moving Parts is her first book.

Sabrina Ramnanan was born in Toronto to Trinidadian parents. She completed her B.A. in English and B.Ed. at the University of Toronto before entering the school’s Creative Writing Program. Sabrina is the recipient of the 2012 Marina Nemat Award for the most promising student. Nothing Like Love is her first novel. 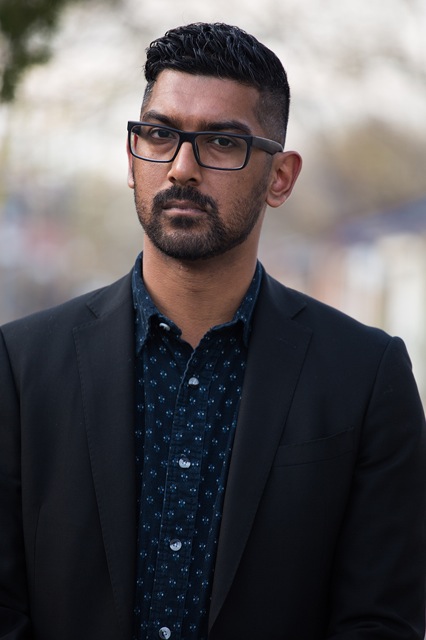 Irfan Ali is a writer from Toronto’s west end. His poetry collection, Who I Think About When I Think About You, was shortlisted for the 2015 RBC Bronwen Wallace Award, and he’s currently finishing up a manuscript, this is it., a story of love and loss told in poems. Outside of his craft, Irfan keeps himself busy as a teacher, program manager, and DJ.

Irfan and your friendly neighbourhood blogger couldn’t decide how to fill this space, at first, but when he let me sneak a peek at this is it. ahead of his Sept. 9 visit to BWS, all I wanted to talk about the way the poems use the image, the idea, the symbol of the desert.

Thankfully, Irfan indulged me with something we’ll call an interview-guest post hybrid: a one-question interview, perhaps, or maybe a response to a writing prompt… Either way, enjoy!

I used to have a lot of nightmares about dying in a desert. Sometimes harsh winds and sandstorms would lead me in endless circles, like in my old Super Nintendo RPGs; sometimes I would be consumed in a single gulp by the sand worms that plagued Muad’Dib’s Arrakis and Beetlejuice’s Neitherworld; sometimes, like Fievel, I’d finally think I was being saved by my loved ones only to find at the last moment they were mirages. These dreams were a bit different each time, but the absolute sense of terror was always the same.

The desert is an almost pure symbol of the harshness and cruelty of life–no wonder, then that the image occurs so often in stories and myths from every part of the world. All art is an exploration of our inner lives, and that’s where I think its real allure lies. We each carry something like a desert within us, though we may know it by other names: void, abyss, dark place, or (for the less dramatic among us) simply numbness and exhaustion. Whatever we call it, it’s a thing that withers our capacity for joy. A thing we’re all afraid to confront. A thing that, like its real world counterpart, can easily become the fate of the more verdant parts of our being if they’re abused or untended.

But deserts are also things of beauty.

As people of colour born in the western world, few of us ever see ourselves represented as embodiments of love. We were raised in a system that privileges the love story as an almost exclusively white experience, and to be frank, are also burdened by our own internalized racism that makes us undervalue and ignore the richness of our own histories. As a result it’s hard for us to maintain our belief in ourselves as loving or sexual beings. For many of us, the desert has a special significance as the site of the few love stories in which we see ourselves most reflected, but that doesn’t make it any less scary. How do we fully embody these stories when none of us is riding magic carpets over The 6 singing “A Whole New World”? When we’re told by society it’s weakness to live our love so fully they rename us Majnun?

More importantly, however, the desert is a place of profound transformation. In scripture, it’s where many holy figures were struck by revelation. It was in the desert after his exile that Moses found the burning bush through which God spoke to him. It was in the desert cave where he would often meditate that Muhammad was first visited by the angel Gabriel. Even those that don’t identify as religious or spiritual wouldn’t deny the logic of that thread. In our society there’s a growing trend advocating the extreme discomfort of solitude as a way of unlocking our most visceral fears and truths–whether through meditation, silent retreats, or sensory deprivation chambers. Is there any place more solitary and silent than a burning, arid landscape that supports so little life? What else so purely embodies the primal fear of death and abandonment that makes us human?

I think that’s the power of the desert as a symbol. It is and has always been our testament in this world that the answers we’re looking for and the stories we want to live are only ever found in the places we’re too terrified to tread.