Michael Fraser is a high school teacher, poet, and writer who has been published in anthologies and journals including Literary Review of Canada, The Paris Atlantic, and Caribbean Writer. His first poetry collection, The Serenity of Stone, won the 2007 Canadian Aid Literary Award manuscript contest and was published in 2008 by Bookland Press.  He also won Arc’s 2012 Readers’ Choice Poem of the Year, and his poem, “Going to Cape,” is included in The Best Canadian Poetry in English, 2013. Michael is the creator and director of the Plasticine Poetry Series. He answered a few questions for us this week — enjoy!

BWS: In The Serenity of Stone, the poems range from Toronto, (where you live), to Edmonton, (where you grew up), and Grenada, (where you born), as well as to France and Cuba, among other places. All are rendered in beautiful detail. How/Why is sense of place so important to your work? What role does a poem’s setting play when you write one?

Michael: My fascination with sense of place derives from my childhood obsession with geography, and more specifically, maps. I used to draw maps constantly. I was so accurate, teachers would ask me to draw maps on the board. I’d create little cities out of everything. My father collected beer bottles and I’d keep the caps and create cities out of them (each cap was a house or building). I’d then draw maps of my room, with my bed centered as the mountainous plateau. I’d spend hours immersed in atlases envisioning the various cities, vegetation, and topography. I also believe living in three distinct climactic regions propelled me to observe and appreciate the uniqueness of each environment.

BWS: Your Grenada poems strike a balance between fondness and fear; the food and weather are inviting, but there is violence, too. At what age did you leave Grenada, and to what degree (if any) would you say nostalgia figures in your work?

Michael: I left Grenada when I had just turned five.

I’d say there’s a nostalgic and psychological digging within the childhood poems. I write the childhood poems to uncover various blocks from childhood. There’s also the ubiquitous Caribbean migrational experience of rejoining your absent parents in Canada and having a deep sense the time rift apart has fundamentally altered your relationship. The immigrating child is often the son or daughter of someone who is now a stranger.

I also grew up in a violent household. I’ll try to make this short. The violence commenced long before I was born. My father apparently kicked my mother, while she was pregnant with me. My mother secured an opportunity to immigrate to Canada and left me in the care of her cousins when I was a year old. I didn’t see her again until I turned five. The family matriarch, Ms. Agnes King, was a great role-model. She has since passed away and I devoted The Serenity of Stone to her. She owned her own hair salon in downtown St. George’s, Grenada. I spent most of my early years in this hair salon. Most importantly, I thought Ms. King was my mother and her daughter, Jean, my sister.

Eventually, my biological mother arrived and whisked me off to Toronto. In the interim, she had sponsored and married my father. The environment was violent and my mother was constantly belittled. Not surprisingly, I was distraught and enraged in school.

We then moved to Edmonton when I was seven. Edmonton saved my life. It’s a long story, but had I stayed in Toronto, I’m certain I’d be either dead or in jail.

A summer trip to Alberta in 1997 was the genesis of my childhood poems. A lengthy conversation with my aunt revealed the alcoholism, violence, and verbal abuse was far more profound than I had recalled. She recounted many events I had psychologically blocked. Thus, I began the childhood poems as a form of therapy and understanding. I think all my childhood poems are infused with both fondness and violence due to this history.

BWS: Your book’s third section, “Neon Adam & Eve,” moves from poems about attraction to ones about loss, and even the acceptance of lost love. It seems almost to build a narrative. Were they written together in such an order, or arranged afterward? And in general, do you know how you will order your poems in advance? Or do groups form based on given themes, preoccupations, etc., that emerge from steady work?

Michael: My poems emerge from various sources. However, since they’re mainly autobiographical, the two most dominant sources are observation and recollection. Thematic groups will gradually emanate from all the poems I write. The poems were not written in any particular order. I have Molly Peacock to thank for editing and arranging the poems.

BWS: A few of your poems (“Dog Days,” “When Night Time Comes…,” and “Because”) employ refrains. What does this device mean to your style?

Michael: I haven’t thought of the refrains, but I assume the practice evolved from belonging to an initially oral-based culture. I’m fond of early calypsonians and their mastery of penning brilliant ambiguous lyrics. For example, The Mighty Sparrow has a song, “Saltfish,” about the Caribbean dish made with salted cod. It operates magnificently as a simple song about the dish. However, once one realizes “saltfish” is a euphemism for a particular body part, the song’s brilliance and humour shoots to the stratosphere! I’ve also been addicted to Brazilian music for as long as I can recall, and the same ambiguous lyrics dominate their early sambas and burgeoned during the Vargas dictatorship. The refrain is often where both or all three meanings meet in the song.

BWS: Speaking of style, you don’t use a single punctuation mark in your first book. Was this a choice made just for these poems, (and if so, why?), or is it a style you naturally tend toward? And do you write poems with punctuation, too? How do you feel about the difference?

Michael: I honestly don’t know why I initially omitted punctuation. I presently view it as juvenile eccentricity. I think I believed it was liberating, but in retrospect, punctuation provides far more freedom. I find it easier now to incorporate natural line breaks, and my poems aren’t as cryptic. I find my biographical style is emboldened with punctuation.

BWS: What are you working on now/next?

Michael: I’ve almost completed a collection of poems centered around historically important African Diasporic figures in the Americas. I’ve also been working on the next regular collection after The Serenity of Stone. Finally, I’m trying to find time for short stories. I’ve only pu 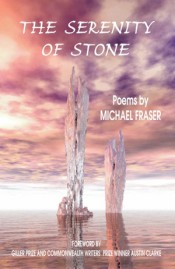 BWS: Thanks so much for dropping by, Michael!

March into Brockton Writers Series (get it?) on Wednesday, March 5, at full of beans Coffee House & Roastery (1348 Dundas St. W., Toronto) and enjoy readings by:

Plus, come early — 6:30pm — for a special talk by Veena: “Writers as Publicists: Saying Yes to Selling Your Book”!

PWYC (suggested $3-$5). Q&A. Books and treats available for sale. Please note that while the venue is wheelchair accessible, washroom facilities are not.

As always, watch this space for more with each of our writers in the month to come!

Angie Abdou lives in the Canadian Rockies (Fernie, BC) where she writes, teaches, mothers, and recreates. Her first novel,The Bone Cage, was the inaugural One Book One Kootenay selection, a Canada Reads 2011 finalist, and the 2012 MacEwan Book of the Year. Her most recent novel, The Canterbury Trail, is a tragicomedy about mountain life, small-town identity politics, and our relationship with the environment. It won a 2012 IPPY gold medal for Canada West and was a finalist for the Banff Mountain Book of the Year. Angie will read from her forthcoming novel, a satire about international nannies and hot yoga.

John Degen is executive director of The Writers’ Union of Canada (TWUC) and has published three books. His debut novel, The Uninvited Guest (Nightwood Editions), was shortlisted for the 2006 Amazon.ca First Novel Award and has been translated into Croatian. He has also published two acclaimed collections of poetry. John writes a popular blog on writing and publishing with a particular focus on copyright. He is also the host of an occasional audio podcast, The Book Room.

Michael Fraser is a high school teacher, poet, and writer. He has been published in various anthologies and journals including: Literary Review of Canada, The Paris Atlantic, and Caribbean Writer. His manuscript, The Serenity of Stone, won the 2007 Canadian Aid Literary Award Contest and was published in 2008 by Bookland Press.  He won Arc’s 2012 Readers’ Choice Poem of the Year. His poem “Going to Cape” is included in The Best Canadian Poetry in English, 2013. He is the creator and director of the Plasticine Poetry Series.

Veena Gokhale started her career as a journalist, in Bombay, in the 1980s. She captures that era in her debut collection, Bombay Wali and Other Stories, published by Guernica Editions in 2013. In 1992, she came to Canada on a journalism fellowship, returning to do a Masters. She immigrated and worked for environment and international development organizations. Her stories and poems have appeared in anthologies and literary journals. In 2011, Veena got a grant to write her first novel. She is presently marketing that manuscript. Veena lives in Montreal with her partner Marc-Antoine. Visit her at www.veenago.com/story.