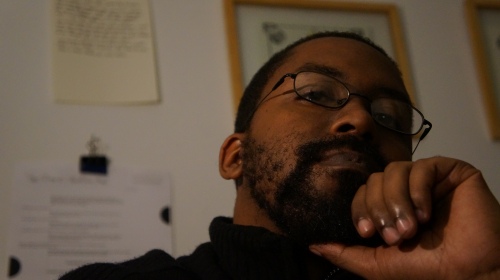 Dane Swan’s second poetry collection, A Mingus Lullaby, was published by Guernica Editions in Spring 2016. Inspired by the life and music of Charles Mingus, the collection explores themes that permeate the life of his subject and Dane’s personal life. A past writer-in-residence for Open Book Toronto, former slam poet, and self-taught author, Dane Swan regularly collaborates with poets, performance artists and musicians as a founding member of MXTP_CLTRS (Mixtape Cultures), a small artist collective.

Dane dropped by the blog this week to chat Mingus, Toronto and more ahead of
his January 11 appearance.

BWS: Some of the reasons may come through in the book, but can you tell us why you built this collection around Charles Mingus, and why the theme of his famous Epitaph concert runs through the book? What drew you to him as an artist (or a person, even), and what about his work speaks to the kind of work you do in prose and poetry?

Dane: The original manuscript that Mingus comes from is over a decade old. However, it didn’t have an anchoring idea that tied the project together. So, when Guernica Editions first approached me about submitting a manuscript, I put it aside and finished off the first draft of what became Bending the Continuum.

I wrote “Lullaby” from Mingus in 2010, while I was writing the final draft of Bending the Continuum. As soon as I wrote it, I knew that I wanted to make Charles Mingus the person who centered the manuscript I had given up on. I’ve always seen a lot of parallels between Mingus and myself; my battles with mental health have never been that extreme, I’ve never had kids, but Mingus is a person who can be described equally by his failures as much as his successes — that’s something I can relate with.

The Epitaph concert is the epitome of that idea. As a concert, it was a failure, but when you step back, when you listen to the results, not only was it successful, it may also demonstrate his genius more than his Monterey Jazz Festival performance. The Monterey performance is obviously a more perfected delivery of his ideas, but in the early sixties, here’s a jazz composer attempting to deconstruct performance. I love that idea. Of course deconstruction in art is common place now. Heck, chefs play with the idea. But a Black musician with a high school diploma, who learned his trade by shadowing great musicians a generation ahead, experimenting with this idea then was brave, and brilliant.

I attempt to take his lead in A Mingus Lullaby. If you delve deeply into the manuscript there’s a lot inferred. Sometimes, I simply tell the reader, “This is what happened to me, or, here are my motivations.”

How does Mingus’s influence speak to my writing in general? I like to think my work is at least brave. Writing for me isn’t an escape, or therapy. It can be something uncomfortable, scary to do. Is my work brilliant like his work is? No clue.

BWS: Several poems in Mingus talk about racist perceptions in Toronto–average people on the street, the subway, etc., as well as staff at Blue Jays games and, notably, the police. In the time between your first and second books, have you seen the conversation about our
city change in light of events here or perhaps south of the border? And/or: do you find what you’ve wanted/needed to say in your work about these themes or this city is changing?

Back when I lived in Ottawa, I hosted one of Canada’s first all-Canadian hip-hop shows on campus radio. I used to occasionally visit Toronto to pick up records. There was a time when every other rap record coming out of Toronto talked about paying off cops, police brutality, you name it. One record, that’s fiction. Two, coincidence. When hundreds of rappers are saying, “The police here are racist and corrupt,” only a fool doesn’t listen.

What has saved Toronto from violence is a movement of talented artists, athletes and social workers who do amazing things. What the media proclaims, is that the police save us. That’s patently false. Police brutality happens so frequently in Toronto, it isn’t news. If you are a POC, or poor, or queer and outspoken the police do not work for you. Those are the facts. By all means, don’t believe me. Speak to victims yourself.

As far as the civilian population and racism:

The rise of Trump has made it worse. I don’t feel safe walking home at night. I often go to events where I may be the only Black person there. I’ve been approached by people trying to instigate things. What can I do? If I stay inside, if I change my personal habits to avoid racists, they win.

When I lived in Ottawa I was egged for walking down a street at night. I had a white man run up to me and scream, “I HATE BLACK PEOPLE!” I remember the look in his eyes. I thought he was going to kill me.

For most of my time in Toronto things have been more subtle. You know, being asked for drugs even though I’m nearly 40 years old. Going to job interviews and knowing that I have no chance by looking at the “diversity” of a potential employer. I could live with that in relative silence. Right now is not the time to be silent.

I guess we can’t talk about Toronto and racism without talking about the Black Lives Matter Toronto kids. I disagree with them, but I think they’re doing God’s work — if there is a God. There’s a real anger festering within the younger members of the black community in Toronto. Many of them have been harassed and assaulted by police from infancy. They were born into this insane random search program. They’ve never had a day in their lives where police have seen them as human beings capable of not being criminals. Without BLM creating a peaceful platform for these kids to vent, it would be chaos. I don’t think regular people in Toronto understand how close we are to real, significant race riots. Again, it’s organizations like BLM, social workers, athletes and artists who are doing yeomen’s work keeping these kids from exploding. Yes, it’s better here than the U.S., but that’s not enough to be proud of. That doesn’t mean that our society is perfect.

Has the conversation changed since I wrote Bending the Continuum? No. Black/POC creative people have been talking about these issues since I moved to Canada 20 years ago. Social media allows us to have a louder voice. More of us have figured out how to navigate the publishing world and traditional media, but none of this is new.

Maybe people are finally listening, but that means nothing without action.

BWS: Some of the pieces in the book might be said to more similar to prose. How do you understand the tension between prose and poetry? Do you think of the pieces as “prose poems”? Do you see a difference between what a “prose poem” does and what some pieces called “flash” or “microfiction” might do?

Dane: I don’t believe in genre, so answering this is pretty tough. Genre isn’t real. Most of us come from a lineage of either Troubadours or Griots. I’m fairly confident Troubadours in Europe and Griots in Africa didn’t think in terms of genre. Such tensions never existed for them. Music, poetry, storytelling were essentially seen as the same thing. Even when the Church began to record oral tradition as text they didn’t speak about genre. Even in cultures where literacy was a central tenet, genre didn’t matter. Chinese calligraphy isn’t in some sort of tension with literature and visual art. Chinese calligraphy is both literature and visual art. We can say the same about ancient Egypt, heck, all the way back to cavemen.

People codify things to exploit them. That’s not necessarily a bad thing, but if you are a creative person and you’re oblivious to your behavior being exploitative, how can one truly create? Genre codification is for academics. It’s for those whose sole goal is to exploit creative expression. It is used for cultural erasure. It shouldn’t be how creators think. Creators should read everything they can, listen to everything they can, look at everything they can. They should dive head first into the idea of seeking questions, not rationalizing an academic philosophy.

What I can say, is that when I write something that I want people to read, rather than hear, I consider how each word falls on the page. The blank space of a page. The lack of blank space on the page. I attempt to force the reader to read words at a pace that I dictate. After writing something, I may look at the page and search for the focal point. Is it a word? A punctuation? Is the eye drawn to the part of the page that I want? There’s always something stated and something inferred in my writing. If all I cared about was surface, I would be a rapper. Again, genre does not exist. The medium is the message, not the genre. If you dream to be a creative person, throw that dated idea away.

BWS: In another interview, around the time of your first book’s release, you said you think of yourself as a writer rather than a “poet”. A Mingus Lullaby is your second book of poems. Will you call yourself a poet yet?

Dane: [jokingly] NEVER!!! I’ve collaborated on music projects and with performance artists, I’ve had short stories published, had a novella reach the finals of a literary competition, etc. The only thing that ties all of my creative work is writing. Plus, if a person goes around saying that genre doesn’t exist, it would be weird if they allowed themself to be defined by a genre.

BWS: Thanks, Dane. We’re looking forward to your visit!