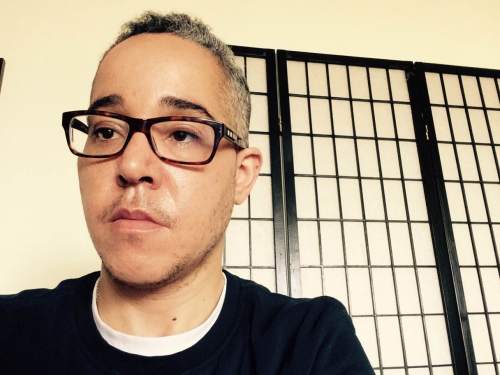 The Lonely is Kumasi Jay Gwynne‘s first fiction manuscript, and it’s largely about men interacting with other men. New York State-born, Kumasi was raised in Toronto where he currently resides. He has spent time living in Vancouver, Victoria, Calgary and Chicago.

Ahead of his July 13 visit to Brockton Writers Series, Kumasi visited the blog this week for an interview with Rachna Contractor, Reviews Editor at Plenitude Magazine, beloved co-presenters for our 2016 Queer Night!

Rachna Contractor: What are your favourite books from the past year?

Kumasi Jay Gwynne: That’s a hard one. I probably shouldn’t say this but I read more non-fiction than fiction. What comes to mind is a book I read recently by Bryan Burrough that my brother sent me called Days of Rage. It’s about leftist revolutionary violence and the FBI in the 1970’s. It covers the Black Revolutionary Army, Weathermen, the Symbionese Liberation Army, and the Fuerzas Armadas de Liberacion Nacional (also known as the FALN or Armed Forces of National Liberation in English). It’s dense but extremely well organized. The author claims to be neutral as far as what he is reporting, but that actually is not the case. His opinions slip in here and there. If you can get past that you learn a lot.

RC: Who are you influenced by?

KJG: I’m a sucker for the classics. I never really rid myself of teenage angst so I still love Camus, Sartre, Jean Genet, Edmund White, Edward Said, James Baldwin, Gore Vidal, Dostoyevsky, Stendhal, William Styron, Simone de Beauvoir….I could go on and on. Now, if I was only so lucky to be able to write like any of these people. I like basic philosophical questions and I suppose that may be the main influence these types of writers have on my own writing.

RC: Tell us about the project you’re working on. When will it be available to the public?

KJG: Currently, I am working on a fiction manuscript called The Lonely. It won’t be available to the public any time soon but keep a look out!

RC: What do you feel you’re trying to say with your work? Who are you trying to speak to?

KJG: All the main characters in this manuscript are men. Being a transman, I am interested in how males interact with one another. How do men express closeness? How do men distance themselves from other men and why? What happens when your sole female role-model passes away? There’s a backdrop of substance use throughout the entire novel. I think anyone that is interested in human connection in its complexities will enjoy The Lonely.

RC: What do you like about this form of writing? How does it compare to other forms?

KJG: This is my first fiction manuscript. The idea for it came from a short story I wrote many years ago and tucked away. With trying to write a book, I have found it nice being able to delve deeper into my characters and the circumstances surrounding them. I like having the time to watch my characters grow and change (or not change). Without that short story though, there would never be a full-length manuscript. I’ve written poems, as well, that I think could be expanded into sections of a novel, or even be the basis of one.

RC: What kind of training (if any) do you have? Do you think writing can be taught or requires training?

KJG: I have had an innate love of writing since I was very young. It was one of the few things I thought that I was good at. I only took one creative writing class in all of university. Actually, that’s where the short story for my manuscript comes from. I recently took a freelance writing course, and I did go to the Humber School of Writing and was mentored by Kyo Maclear, but I have never studied fiction writing. I learned so much from her and my writing definitely changed for the better as a result of her influence. I don’t think you need years of fiction writing classes to be able to write fiction. However, if you are new to creating something you want to publish you definitely need the insight of other writers to carry you to the end.