Tom Cho‘s collection, Look Who’s Morphing, was originally published to acclaim in Australia, where it was shortlisted for multiple awards and is now in its second printing; in North America and Europe, it has just been published by Arsenal Pulp Press, and launched in Toronto last night. In addition to Look Who’s Morphing, Tom’s fiction has appeared widely, in publications including the Best Australian Stories series, Asia Literary Review and The New Quarterly. He stopped by the blog this week to expand on a few thoughts his book provoked in this reader.

BWS: You’re a writer who has quite literally stepped into the shoes of a different person in stories like “Dirty Dancing,” “The Sound of Music,” “The Bodyguard” and more, using plots not so different than the source material but inserting a new narrator in the place of Baby, Maria, and Frank Farmer (Kevin Costner). And the title story is about characters who can morph into anyone they see on television. Is there a master statement here about (re)appropriation, or idealization, or imitation and identity (or something else entirely)?

Tom: I wouldn’t call it a master statement, but here’s one word that comes to mind: re-imagining. In my book, I playfully re-imagine the universes of different texts, including some pop cultural works of which I’m a fan, such as The Muppet Show.

I consider my book’s central theme to be identity, particularly personal identity. But a big problem I faced while writing the book was: how to speak of identity? On the one hand, “identity” is this term that’s so freely (in fact, often indiscriminately) used; yet, on the other hand, identity is a pretty abstract concept, which can be intimidating because it doesn’t let us in very easily.

One way to speak of identity is by creatively responding to different texts. Texts (including films, books, TV shows and music) provide texture or terrain for forming and reforming our identities. That’s a big reason why Look Who’s Morphing makes such explicit use of textual reference. And, in re-imagining the plots and protagonists of Dirty Dancing, The Sound of Music, The Bodyguard, etc., I was able to explore some important emotional territory because we invest texts with a lot of aspirations and desires. This is why, in our encounters with texts, we can be so deeply disappointed by what we do and don’t find.

When we don’t re-approach texts in imaginative ways, life becomes not only mundane, but dangerously so. It means that stories are read in the same kinds of ways and power rests with the same kinds of stories and people. It means, for example, that texts get read in ways that remove traces of certain types of people and their lives and desires. So re-imagining texts is this vital practice and it’s to be used not only for writing books and making other kinds of art, but for living our lives.

BWS: “Tom Cho” is the main character in several stories. But it’s obvious that some of these stories aren’t factually true — take the hilarious, hyperbolic translations of Chinese names in “Dinner with My Brother,” for example. How do you balance fact and fiction when you write?

Tom: You mentioned “hyperbolic” in your question. I love working with hyperbole, among other forms of artistic excess. I’m also into artifice and irony. And I seriously dig stylization. All of this is very much reflected in Look Who’s Morphing. As I’ve said before, I like to write fiction that flaunts its fictitiousness.

That said, all fiction flirts with fact, if only because it’s written and read by flesh-and-blood people who live real lives. And in the midst of all of the fictitiousness of my work, it’s a really understandable desire to want to draw correlations from fiction to fact. I wrote a book that’s full of outrageously fanciful tales and I get asked all the time whether the characters are based on real people, including myself. I think a big reason why we ask those questions is because we live in a world of real-life experiences and consequences, and we look to stories not only to help us organize and make sense of that world, but to help us intervene into particularly entrenched and pernicious ways of making sense of the world. So there are important tensions between fiction and fact because the stakes are high with stories.

In the end, I hope that I’ve written a book that rewards creative readings. As I said, in writing Look Who’s Morphing, I playfully re-imagined these TV shows and films and other texts. In turn, I encourage my reader to bring their imagination and sense of play to Look Who’s Morphing. That might also include resisting the impulse to flatten out the play of the book by reading in search of conclusive answers to questions of fact and fiction. The book is called Look Who’s Morphing, so it is worth keeping those kinds of questions liquid and alive, which helps to create the conditions for one to endlessly re-imagine the book. And re-imagining is, as I mentioned earlier, a practice that has real-life consequences too.

PS: Over the course of my arts career, a lot of attention has been paid to my status as an artist from various minority groups. I get asked what it’s like to write as a person of Asian background, as a queer person, etc. And while those considerations are definitely important (even if some questions get a bit boring), I write fiction, which means that I overlay all that “writing as” with “writing as if.” I’m always appending the fictive as if to the words of the creative pieces that I write and I think that writing as if makes its own claims to truth. After all, surely “truth” doesn’t always mean “facts.” We can look to lots of different sources to find different kinds of truths, however provisional those truths are. Sometimes we look to works that we deem non-fiction; sometimes we turn to eyewitness accounts for verification; sometimes we give much credibility to scientific approaches. Some people look to the words of prophets and other figures — in fact, sometimes, we try to do truth through how we act. So “truth” can also mean, for example, “words to live your life by.” And, in this latter sense at least, I harbor a hunch that fiction can be a circuitous form of truth-telling.

BWS: “Chinese Whispers” is a story about a game (“Telephone,” to North American children) that appears to also be a version of the game. How do you see the connection between game-playing and fiction (in your own work, or more generally)?

Tom: I could write thousands of words in response to this question, but here’s one shorter take: reading is like a guessing game. As we read, we make guesses of many types, including guesses as to the author’s intentions and (particularly in the case of fiction) the plot. As we read, we also predict and anticipate meanings. And let’s face it: some story structures are more predictable than others and, more to the point, some ways of reading are more predictable than others.

So, in developing Look Who’s Morphing I tried to write this porous and open-ended work that, in one sense, is like a big playground for the guessing game that is reading. And a serious part of that play (which can also be seriously fun) is the part where I as the author play with readers’ expectations and with routinized ways of reading. I find that working with fiction can offer me a lot of licence to do that. This isn’t to say that my own fiction can’t also, in the end, be read in some banal ways anyway. But I hope that, in the course of my play, I create lots of potential for playful readings. 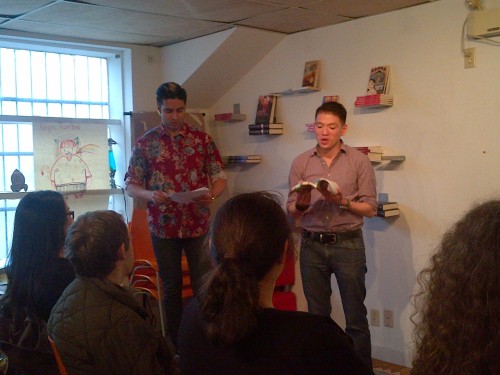