Kate Cayley’s first collection of poetry, When This World Comes to an End, is published by Brick Books. She has also written a young adult novel, The Hangman in the Mirror, published by Annick Press. She is the artistic director of Stranger Theatre, and has co-created, directed and written eight plays with the company. She is a playwright-in-residence at Tarragon Theatre, and her play After Akhmatova was produced as part of Tarragon’s 40th anniversary season. Her new play, The Bakelite Masterpiece, will be performed at Tarragon in Fall, 2014, and her first short story collection, How You Were Born, is forthcoming from Pedlar Press. Kate drops by this week for an interview ahead of her May 7 visit.

BWS: You’ve written plays, a young adult novel, poetry and now a collection of short stories. How does working in multiple genres affect your process? Do you find that knowing how to write a play, for instance, helps with your fiction or poems? What can these genres teach each other, and what have you learned?

Kate: At the best of times, working across forms helps me to think about form seriously—what is integral to poetry, what to theatre, what to fiction? I think of poetry and theatre as quite linked forms. Not in the use of language—plain and sometimes even clumsy speech is essential to a play—but that success is often achieved through sparseness of execution, through cutting away. And they share an eerily similar relationship to time: they are precise expressions of an absolutely present moment, though poetry is reflective for me, and theatre is forward propulsion. I find theatre much more difficult structurally than poetry; because the terms of drama are pretty fixed, at least for me, it’s not something I can play with. Poetry seems more open, though this might be laziness—perhaps I should cleave to the rules more. In contrast, fiction is more relaxed. Of course it demands focus, but it can contain both reflection and forward movement. Though fiction still feels like unexplored territory for me, something I’m just beginning to understand (not that I understand the other two!).

At the worst of times, working in numerous genres means I am not serious in my attention, that my focus is always split. That worries me. But in an ideal world, I’d like to keep working in multiple forms and still improve my game—it’s not impossible. I think the forms do genuinely teach each other things: how to tell a story, how to be simple and direct, how to explore an image, how to focus, how to pull away and let go. I don’t think I’ve learned all those things, but I hope I am learning, slowly.

BWS: The poems in When This World Comes to an End predominantly look into the past, based often on old photographs and the people in them. Why this fascination with history? And were the poems intended to be written as a group for the collection, or did you compile them after finding yourself returning again and again to the archives?

Kate: I’ve always been fascinated with history, but with imagining it as much as recounting it, which is what poetry (or theatre or fiction) can do—explore that blank space where the record trails off, becomes banal or simply murky. There’s a moral problem with this of course, because you are inventing a more coherent or more beautiful past, but it can’t be helped.

In terms of the collection, I think of these history poems as imagining a life that is unimaginable—especially in the photography poems, based on images in the City of Toronto Archives. It was the anonymity of the faces in these photographs that drew me in the first place. They were so beautiful, and so deeply opaque, startling so. That seemed to fit as a subject for poetry.

The middle section was conceived as a whole; in fact, it’s made up of highlights from an earlier book-length manuscript that I discarded. You can’t make a book out of photographs. Or I can’t. The rest of the poems, while thematically linked, were for the most part written separately, and collected over years.

I do admire poetry collections that form a coherent narrative, and would love to write one someday.

BWS: What can readers expect from your new short story collection, due out this fall?

Kate: Love. Families. Modern ghost stories. Very strange children. Present-day Toronto and the mountains of West Virginia in 1968. Some darkness and some hope.

BWS: How do you pick your projects? In which genre will you be working next, and why?

Kate: This sounds affected, but I think you don’t exactly pick. As in, you get obsessed with a thing—a story, an image, a sentence that is obviously the beginning of something, at least temporarily—until it finds a proper form, and you write it, often disappointingly, because it seems so limited on the page, when it was so vast in your head. Maybe this gets better with practice, this feeling of the space between what you wanted and what you made. I suspect not, or not very much.

Up next is a play called The Bakelite Masterpiece, which is about art forgery and war crimes. It will run as part of Tarragon Theatre’s season in fall 2014. I am also working on a play for Zuppa 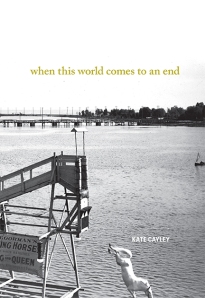 Theatre, which is a company in Halifax, and a new, solo play about a teacher who develops a frightening relationship with a damaged young woman in her classroom. Both of these are in very early stages.

I am also working on a second collection of poetry, tentatively titled Wolf at the Door. And I dream of writing a novel, but that remains a fantasy at the moment. Fingers crossed for next year.

BWS: So are ours! Thanks for stopping by the blog, Kate.

Kate Cayley visits the Brockton Writers Series on Wednesday, May 7, 2014 — full of beans Coffee House & Roastery, 1348 Dundas St. W., Toronto (7pm, PWYC) — along with Adam Abbas, Tom Cho and Amanda Leduc. Come early, too (6:30) for a special talk by Amanda: “From Couchsurfing to Cafés: The Magic of the D.I.Y. Book Tour”!