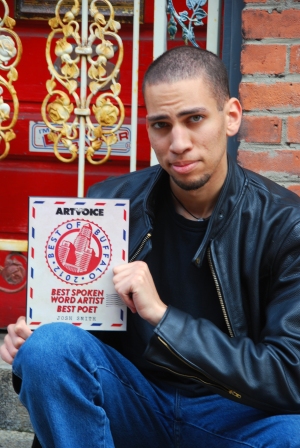 Josh Smith of Buffalo has been a fixture on the Toronto poetry scene since his first appearance at the Art Bar Poetry Series in 2010. He has since joined the series’s board of directors, and in 2012, he was named Buffalo’s best poet and best spoken word artist. I sat down (at my computer, and exchanged emails) with Josh before his November 13 visit to the Brockton Writers Series.

BWS: Around this time last year, you celebrated your 500th performance, a mere six years after your first. That’s at least one reading per week — and we can’t ignore your fabled adventures on the QEW, either. Talk to us about your performance schedule. Are you always presenting new work? Do you ever sleep?

Josh: Like anything, my performance schedule ebbs and flows. This year, my focus has shifted, and with the Art Bar board we’ve been making scouting trips, keeping ears to the ground, scheduling, booking, promoting, so on and so forth to keep the series its strongest. That comes at the expense of a performance schedule. I’ve also gone back to school this Autumn, taking online courses at Harvard. It’s a demanding program. So, Des Moines, IA isn’t at the top of my list at this moment, but 2014 holds a lot of promise for getting back on the road.

BWS: You promote your shows using YouTube videos that you make yourself, and in some of these videos, you talk about wanting poetry to be the Super Bowl halftime show — to be in the hands and hearts of the average person, not just other poets, university English departments, etc. Tell us more about popular appeal and poetry and what it means to you to get in front of — or get in the faces of? — the non-typical audience for poetry.

Josh: There are three groups of people in poetry and in life: those who are always going to like what you do, those who will never like what you do, and then there’s the ninety percent in the middle. As an artist, you have to ignore those first two groups, because you cannot change their opinions. And if only five percent of that ten is head over heels for you, it’s extremely unlikely that they will support you enough to pay your bills. Not everybody wants to make a living at poetry, and most poets I know are convinced it’s not possible; it is, but not without that mainstream, non-poetry audience.

BWS: Maybe it’s just me, but I thought your work, your web presence and the readings I saw online exuded a very strong D.I.Y. ethos — “underground” poetry, of a kind. You even made your own DVD! How do you see the relationship between the “mainstream” you hope your poetry (and all poetry) will again enter and independent performers like yourself?

Josh: I’m not in love with the term “underground.” I’m a main event talent, anywhere in the world; that’s the attitude that I, and anyone trying to break through, needs to have. I don’t think terms like “underground” and “indie” have negative connotations, but I think that projection and perception are reality. If I tell CTV that I’m an underground, D.I.Y., indie poet, and they should put me on their network, I expect them to say, “Thanks, but no.” I’m of the mind that it’s in my best interest to say, “Hey, you need me on your network. I’m a star. Somebody is going to figure out what to do with me, and together we’re going to make lots of success. You’ve got a chance right now to be that somebody.”

BWS: You’ve performed all over North America, but your home is never far from your work or your persona, and you were named Buffalo’s best poet and best spoken word artist last year. What does Buffalo mean to you, and to your poetry? What did it teach you about the kind of poet you wanted to be?

Josh: I gave a speech last year in Toronto, professing my love for Canada. In that speech I said, “I am proud to be from Buffalo, but I am not proud of Buffalo.” If I was content to be an auto mechanic, I’d never leave home. Buffalo’s a great city; it’s just not great to be a poet there. No matter where I go, though, I carry Buffalo with me. My logo is a modified Buffalo flag, it’s in my introductions. I’ll never hide it. I try to represent what’s right about Buffalo poetry.

BWS: What about Buffalo today helps/encourages/inspires you to write? What might the future hold for your hometown, and what might that future give to your work?

Josh: I believe Buffalo’s future will come from transplants. Most of the people I see making progress at home are those who came from other cities, with different backgrounds and ideas.

BWS: What keeps you coming back to Toronto?

Josh: I first read in Toronto on September 10th, 2010, so I’ve been coming a little over three years at this point. I’d say Toronto accounts for at least a third of my appearances since then. I could write a book on my love for the Toronto poetry scene, but simply put: Toronto brings together the world’s best poets with the world’s best poetry fans. And it’s funny, because I hear Torontonians complain about their scene, but it’s the greatest one I’ve ever known. Food for thought.

BWS: Is reading in Toronto similar to reading in any particular American city?

Josh: Putting Toronto side-by-side with other cities, I’d say that the crowd size is similar in Washington, D.C., but the attitudes are total opposites.

BWS: Do you have any favourite Canadian poets? Does the work of any contemporary Canadian poet(s) speak to you or seem like it would read well alongside yours?

Josh: I have new favourite Canadian poets every time I make the drive! I’m a huge mark (carney term) for new guys on the rise such as Will Kemp, someone who started open micing at Art Bar every week and who has made crazy progress in the last year. I’m also part of this strange class of newbies in Toronto; I’m more experienced than a guy like John Nyman, but we broke in Toronto around the same time, so I see a lot of him on the circuit, and I’m always thrilled with how he’s progressing. Jessica Bebenek is in that same group. And that same experience that I kind of check at the border still allows me to hang with some more seasoned performers, your Sonia DiPlacido(s) and your Clara Blackwood(s). I’m in great company with the crew at Art Bar. Ritallin is one of the top guys not just in Toronto, but in Canada. Stephen Humphrey has become a mentor of sorts. Then there’s Liz Worth. At all times she’s both the poet that I think I would be if I was a Toronto woman, and the poet that I want to be now!

All of those people have a different style than me and than each other, but I think the tie that binds is that, all of those people I mentioned, truly are having fun out there night after night. I had a great reading in September at the Underdog Poets Academy — you couldn’t have assembled four more different writers, but we all had so much fun, it just clicked. I believe that if you throw me on any show, whether it’s Brockton Writers, or AvantGarden, or Rochdale Rhymes and Readings, or Pivot, or Nice Italian Girls, no one will go home disappointed with the giant American in the room.

BWS: Thanks so much, Josh. We’ll hold you to that!

Watch this space for more with each of our readers in the month leading up to the event!